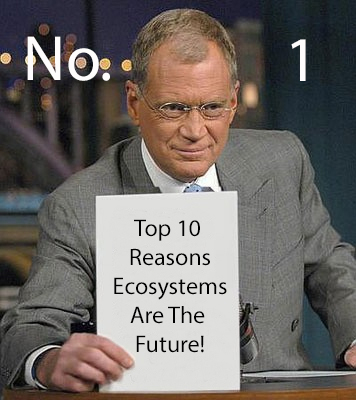 In part 1 of this post, I introduced “our survival” as the top reason I believe ecosystems are the future.  I focused on redefining community via an internet of emotions as crucial to addressing social issues that threaten our survival.  However, redefining community alone won’t solve our social issues. We will need to align our priorities and utilize every cognitive and creative ability at our disposal to create solutions that enable us to endure.  That is what I’ll focus on in part 2 of the post.

The Improbability of Human Life 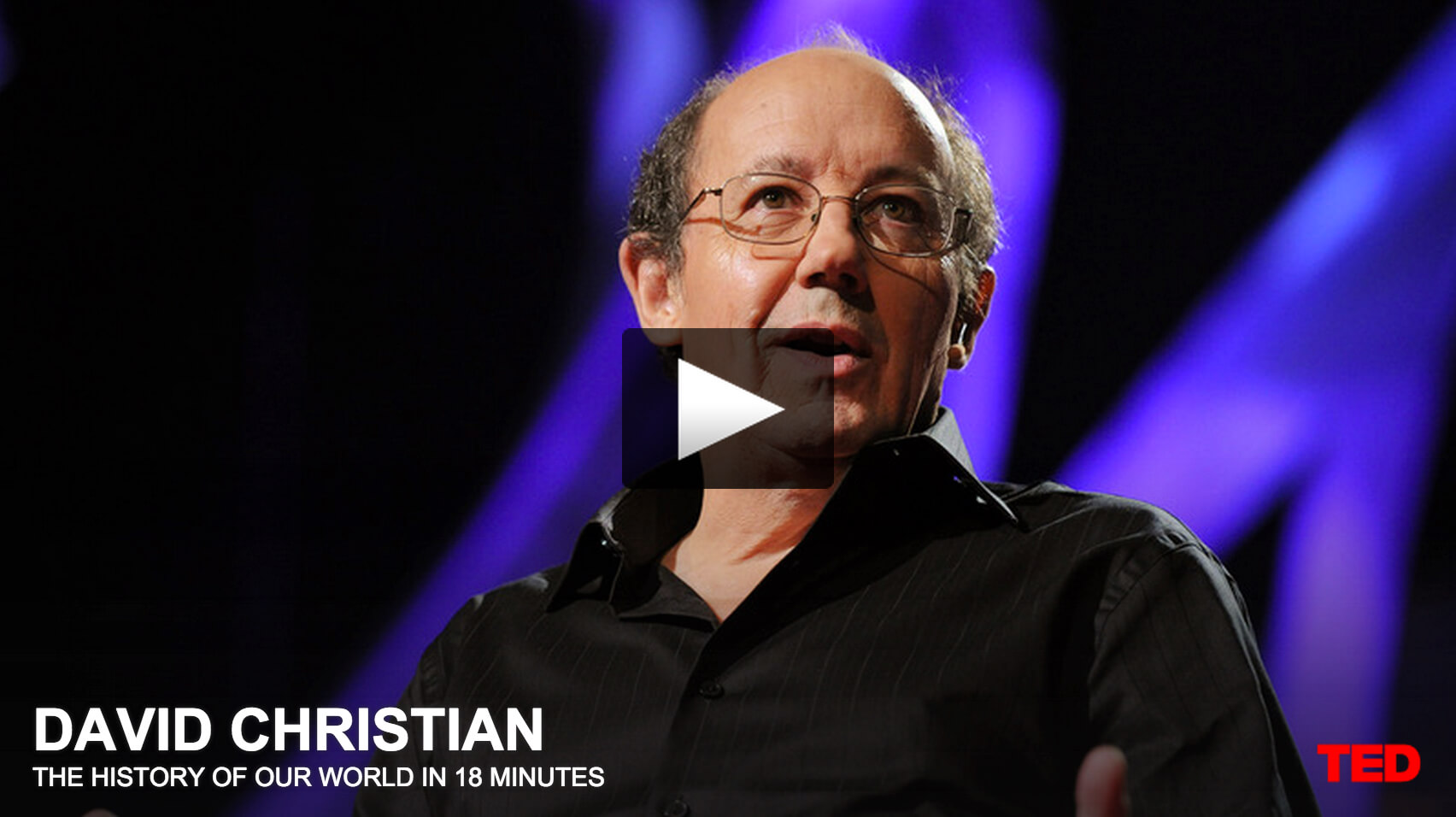 Consider for a moment the existence of human life.  The fact that we exist is so improbable, it’s mind-boggling.  If you have 18 minutes to invest in your future, take a look at David Christian’s fascinating Ted Talk on Big History.  In it, he shows how life on our planet emerged in spite of the universal law of entropy, which says that the tendency of the universe is to move toward the lack of order and structure. He describes the crossing of six thresholds of complexity throughout the universe’s 13.7 billion year history that led to the scientific miracle of human life.  Now, imagine that life as we know it on Earth is the only complex form of life throughout the universe.  If that were true, and futurists like Ray Kurzweil believe it is, then what we have created here on Earth is so rare, precious and utterly magnificent that it is incomprehensible to imagine it ceasing to exist.  The law of entropy states as complexity increases, things become more fragile and vulnerable.  Entropy says we should cease to exist.  Mankind’s great challenge is to grasp this concept and value the continuance of life above all other priorities.  We have a great responsibility to ensure that it does.

Christian notes that collective learning  – our ability to capture, organize and share what we have learned – differentiates human beings from all other creatures on Earth.  Indeed, our ability to collectively learn is advancing exponentially as scientists and technologists work to replicate and surpass the cognitive abilities of our minds through artificial intelligence.  Deep learning, the biologically-inspired programming paradigm which enables a computer to learn from observational data, is leading us to the day that machine intelligence surpasses the brightest human minds.  In his book The Singularity is Near, Ray Kurzwiel refers to the singularity as an era in which our intelligence will become increasingly nonbiological and trillions of times more powerful than it is today.

“The Singularity will allow us to overcome age-old human problems and vastly amplify human creativity.  We will preserve and enhance the intelligence that evolution has bestowed on us while overcoming the profound limitations of biological evolution.  But the Singularity will also amplify the ability to act on our destructive inclinations, so its full story has not yet been written.”

So, if we are to harness artificial intelligence to vastly amplify human creativity while avoiding our destructive inclinations, what is it that we must collectively learn to be?

The Leading Edge of Mankind

“[Interdependence humans] have a remarkable capacity for solving complex problems that other people can’t get within a million miles of.  [They] look at the world in respect to the many problems that its existence creates – different wants in different species, different values in different [people].  [They] see the world and all [] its beings [] as truly interdependent.  [They] value that which will enable all animals, all plants and things to be.  [They have] a basic confidence that they, through a burgeoning intellect freed of [] lower level anxieties, can put the world back together again.”

Graves referred to the Interdependence value system as the leading edge of mankind because of its members’ uncanny ability to co-exist with others in a way that maximized collective creative and cognitive abilities.  He found that those with Interdependence values expressed themselves, but not at the expense of others.  They collaborated more effectively because they acted on common purpose without ego, fear or compulsion.  In essence, they operated as a creative, cognitive ecosystem.

Graves called the transition to the interdependence system mankind’s momentous leap because it represented humans crossing an “awesome chasm of significance.”  The transition marks the point in which humans demonstrate that which uniquely differentiates them from other animals – the shift one experiences by letting go of animal-like fears, the awareness that brings in how fragile human life is, and the resolve it creates to solve the problems that threaten our continued existence.

Now, freeing oneself from any form of fear or compulsion is a tall order indeed, but it is not impossible.  Graves noted the key conditions that lead one to challenge their beliefs.  First, an inner conflict, arising from the realization that one’s beliefs create unsolvable problems, must challenge their priorities.  Second, one must gain insight into new mindsets that address the unsolvable problems.  And last, barriers must be overcome so that one can reinforce their new mindset.

Let’s examine how artificial intelligence could propel us through Graves’ transition process and reinforce new ways of thinking.  We are all familiar with virtual assistants like Google Now, Siri, Cortana and Alexa.  These artificially intelligent virtual assistants represent cognitive ecosystems that learn to better assist individuals from their collective interactions with all of us.  While they are currently focused on simplifying our lives, imagine us having human-like conversations with them to assist us with more complex aspects of our lives.

Imagine Alexa subtly challenging your beliefs and raising awareness of the unsolvable problems caused by them.  Imagine Alexa recognizing patterns emerging from everyone interacting with her and sharing stories that illustrate new ways of thinking.  Imagine a viral process where Alexa engages people in discovery, dialog and support for making decisions in new ways.  This, in essence, would be an AI that learns from the developmental experiences of everyone on the planet.  Now, imagine that AI is patterned after the interdependence value system and the transition process required to support people in their journey toward it – a virtual assistant and life coach that guides people through lives of simple and fulfilling experiences that balance convenience with social responsibility.  Imagine your daily routine.  Not only does Alexa do your grocery shopping for you, but she helps you select items that are organic, responsibly sourced and eliminate waste.  Not only does Alexa operate your lights and thermostat, she helps you reduce your carbon footprint.  When she arranges your travel, she selects options that reduce congestion and pollution.  She provides transparency into the sustainability of every provider you interact with and reinforces the power of the individual in promoting global corporate responsibility.  This kind of AI would reinforce a positive collective consciousness for problem solving and individual/societal growth.  If we are to establish a model for artificial intelligence, let us model it in this way.

Ecosystems and Our Survival

This concludes the series on the top ten reasons why I believe ecosystems are the future.  I hope you see how promising and versatile ecosystems are for everyone.  To someone with the Prosperity value system, an ecosystem is a disruptive business model – a radical new platform to create competitive advantage, spur growth and accumulate wealth.  To someone with the Community value system, an ecosystem is a liberating construct – the means to share and create equal opportunity as well as distribute wealth and ensure meaningful life experiences for all.  Finally, to those with the Interdependence value system, ecosystems represent the breakthrough infrastructure needed to create widespread empathy, evolve capitalism consciously and enable us to collectively learn how to co-exist and endure.  All of these worldviews and perspectives are valid and true.  And that’s why ecosystems are so important.  They are unifying in nature.

I would like to close with a quote from my favorite scene in the movie Life of Pi, the story of an Indian boy who survives a shipwreck, in which his family dies, and is stranded for a year on a lifeboat with an adult Bengal tiger named Richard Parker.  The story is a metaphor for our challenge of co-existence and survival.  In the scene, Pi reflects on his journey:

“I suppose, in the end, the whole of life becomes an act of letting go.  But what always hurts the most is not taking a moment to say goodbye.  I was never able to thank my father for all I learned from him – to tell him without his lessons, I would never have survived.”

If we are to survive the challenges we face, we must learn to question the beliefs we hold most dear and let go.  We must learn to think, feel and act collectively.  Ecosystems will give us the opportunity to face and overcome our most important challenge –  to dare to act with one heart and one mind.

So, let us begin.

This site uses Akismet to reduce spam. Learn how your comment data is processed.